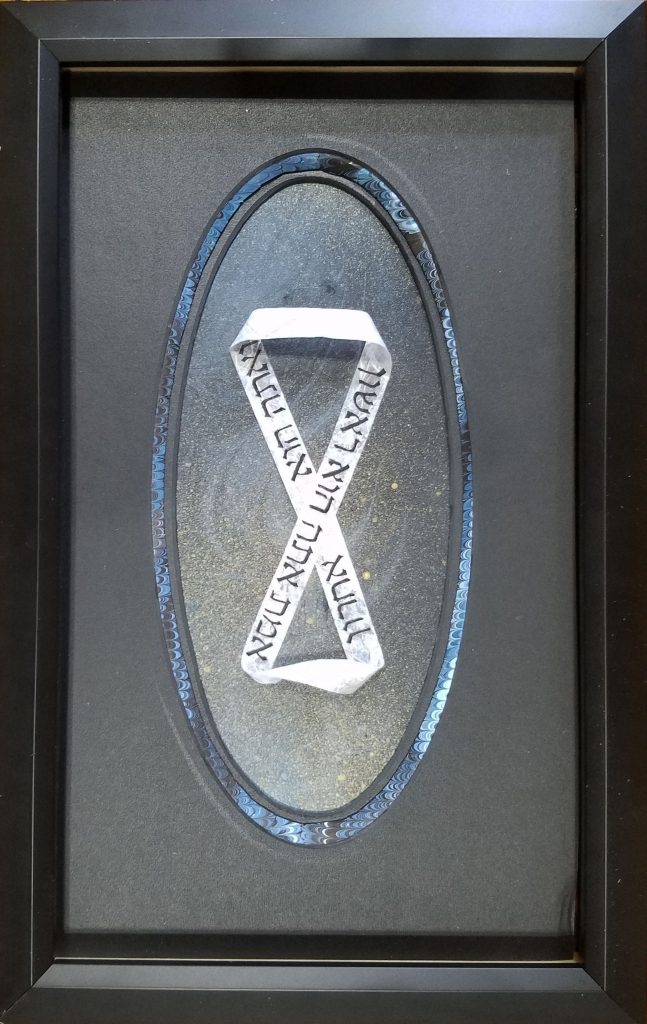 “True, you are the first and you are the last (Emet, ata hu rishon v’ata hu ackaron)” is one of the benedictions recited every morning following the Shema, the Jewish statement of faith.  A Mobius strip is a twisted loop of paper; if you follow it along one side, you seamlessly transition to the other side, on an infinite pathway.  The blessing and the physical construct seemed to go together in my mind.  The verse begins at the bottom left going upwards, circles invisibly, and finishes by descending from the top left to the bottom right.  It is not easy to navigate, but as my teacher Michael Gilbert taught “Art doesn’t always have to be easy”.

The word “Emet”, means “true” or “truly” and is not only one of the names of the Lord, but it is made of the first, middle and last letters of the Hebrew alphabet aleph, mem, tav.  I love this.

The background and one of the mats are covered with different marbleized papers, courtesy of Jill Deiss at Cat Tail Run Hand Bookbinding.  The Mobius loop is made of Unryu paper, with inked lettering.  Framed, it is 11.5″ x 18″ and 1″ deep. 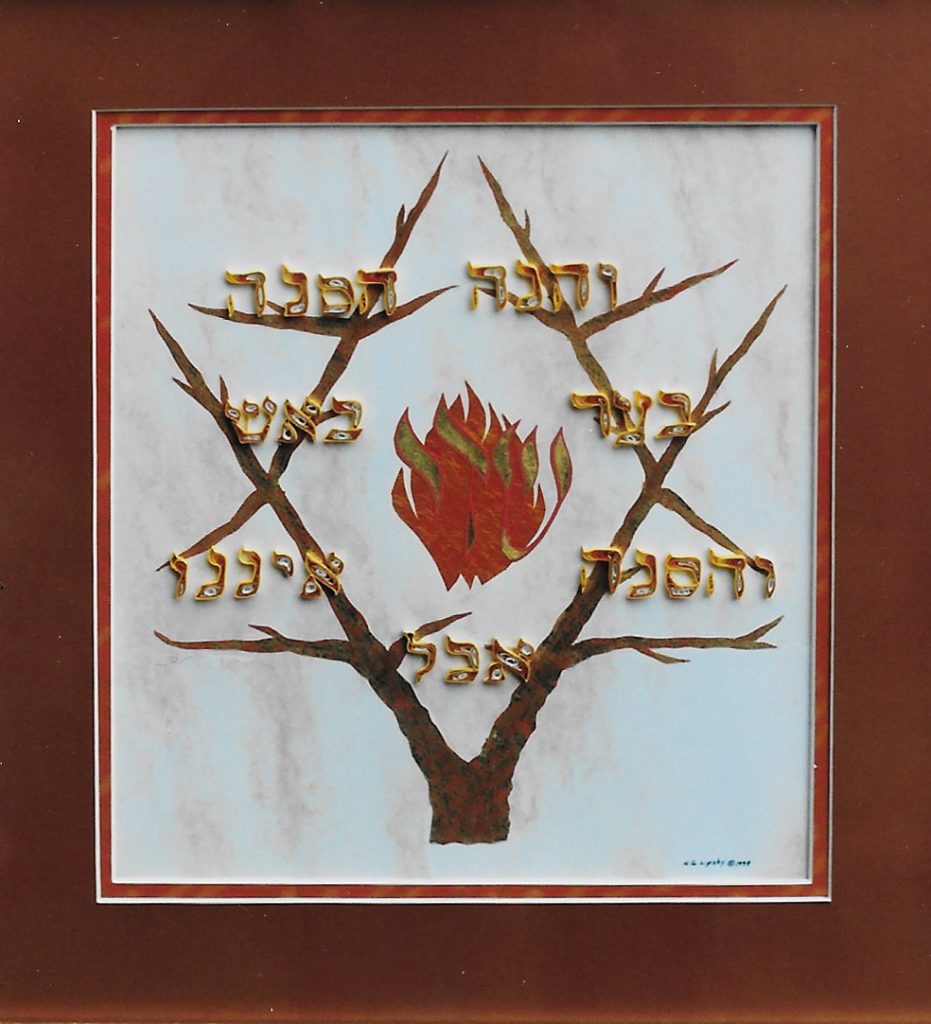 “The bush burned but was not consumed” is the verse that inspired this artwork.  It is made entirely of paper, paint and gold leaf.  The verse is quilled in hebrew letters meant to look like flames.  At the center, in gild paper, is the Hebrew word “Shadai”, one of the names of God.  The tree is paper with some paint and gold leaf.  The background is a sort of faux-marbre paper that I purchased. 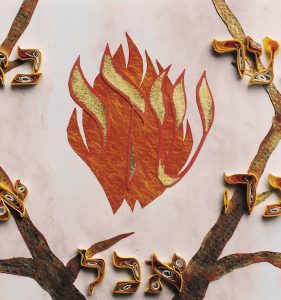 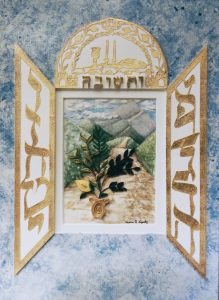 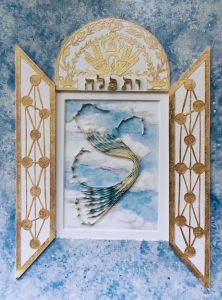 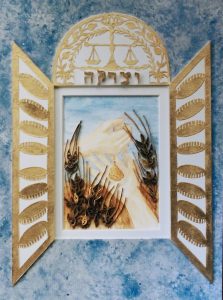 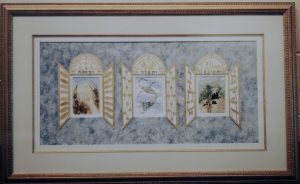 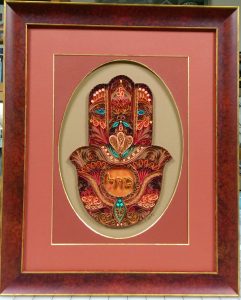 A hamsa is a good luck charm, common to many cultures.  This hamsa features the word “Mazel” or “luck”.  It is made entirely of quilling, and the Hebrew letters and other accents are edged in 23k gold leaf.  In addition, the inner bevels of both the inner oval mat and outer rectangular mat are hand-gilded.  The piece measures 11 x 14 and is in a striking red, wooden scoop frame.

This work was part of the wonderful exhibit of art by members of the American Guild of Judaic Art, at the Sherwin Miller Museum of Jewish Art in Tulsa, OK in the summer of 2017.

Shalom in the Chinese Style

This Shalom (Peace) is my interpretation of the “new” style,  exhibited in Chinese quilling.  It is loose and flowing, rather than the specific elements found in traditional quilling.  The mat was covered with textured paper.  This piece was about 11 x 12. 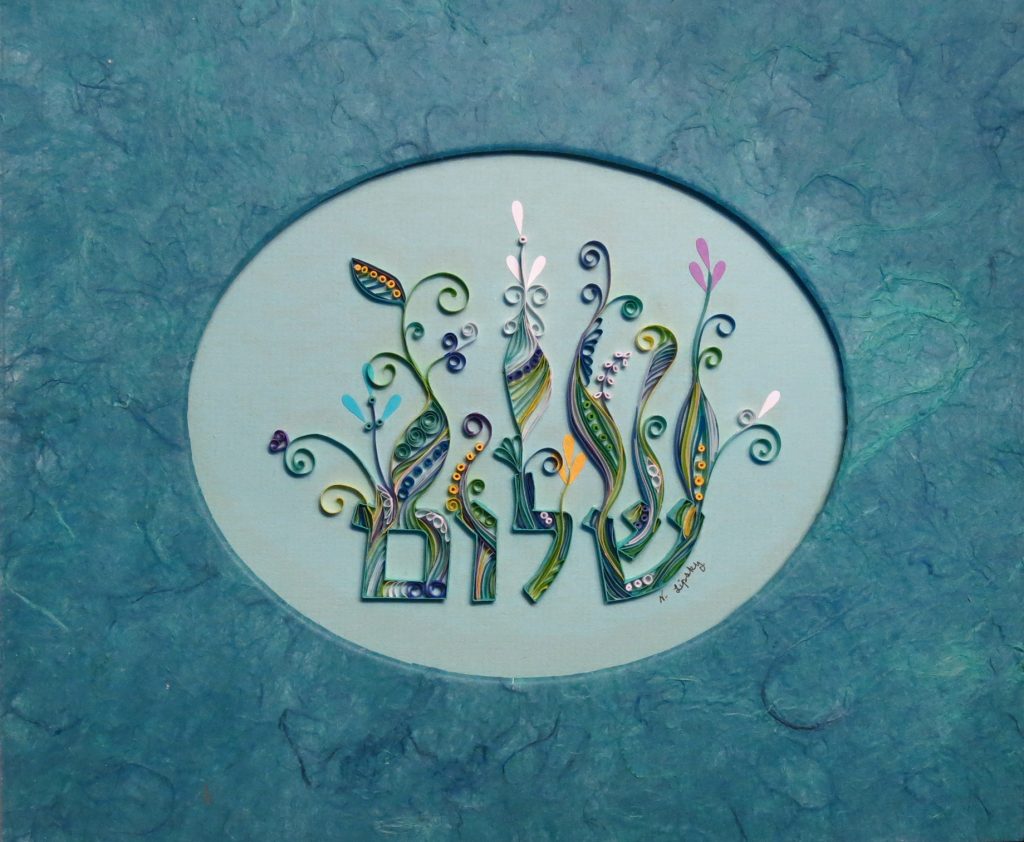