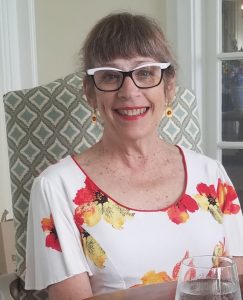 Ever since she was a little fairy princess girl, Naomi Geller loved to make things, with paper, scissors, and glue, or fabric, or paint or clay, or whatever hands could do.  However, she also wanted to save the world.  To that end, she earned a PhD in biochemistry, cellular and molecular biology at the Johns Hopkins School of Medicine in Baltimore, and embarked on a satisfying career in research, (for my scientific c.v. with publications, please click here) as well as marrying Dr. James J. Lipsky.   At the same time, she took graduate-level evening classes at the Maryland Institute College of Art, and the Baltimore Hebrew University, where she studied picture framing, gilding, paper making, illustration, and Torah, conversational Hebrew, and Jewish mysticism, respectively. When the creation of her artwork became more meaningful to her than her research, she made the decision to retire from science and become a professional Judaic artist.  Which worked out well, because a darling daughter was added to the family around this time.

Naomi’s award-winning work has been exhibited in a variety of museums and galleries, and featured in books and other publications (for my artistic resume with publications click here). One highlight of her artistic career was receiving her accreditation from the Quilling Guild.  Another goal accomplished was having had her crossword puzzle published in the  N Y Sunday Times Magazine .

Naomi and family moved from Baltimore to Rochester, MN in 1990, after Jim was invited to head a Unit at the Mayo Clinic. Once there,  Naomi helped found a co-op gallery for local artists (the SEMVA Gallery). She was the Director for its first three years, during which time she had major responsibility for such matters as legal and tax issues, public relations, staffing, bookkeeping,  and sales.  Naomi was also appointed to the Board of the Rochester Public Library.  After 12 years in Rochester, she was introduced to hospice care during her husband’s final months.  She later served on the Board of Seasons Hospice.  A few years after that, Naomi married Mr. Ed Haskell.

Naomi and Ed moved to RI, and later went their separate ways.  Naomi graduated from the Master Seamstress Level I and Level II programs of the University of Rhode Island.  She has taught home decor classes, and has been a free-lance writer for the Rhode Island Jewish Voice.  In 2013, she was elected President of the Society of Gilders, which position she still holds, but she finds time to create artwork, make puzzles, and play computer solitaire.  She currently lives in Falls Church, VA

Naomi is a member of the following organizations:

The Society of Gilders – This is an international organization dedicated to the teaching and practice of gilding. They have a semi-annual journal, and conferences every two years. I joined when it first formed in 1988.  I have learned a tremendous amount through SOG classes, and I have met some extraordinary people, and formed enduring friendships.

American Guild of Judaic Art – I joined this group when it formed in 1991, and have met many fellow Judaic artists and shared the challenges of this career with them.

Pomegranate Guild of Judaic Needlework  – I joined the Guild in 1985; it changed my life. I met grandmothers who traveled abroad just to learn new needlework techniques, and other men and women who create unbelievable works of art.  I formed a chapter in Baltimore, and was on the Board for a while. The chapters meet monthly and learn new projects and techniques. There are annual conferences which are a wonderful way to meet everyone and learn.

The Quilling Guild –  This is the original society dedicated to promoting quilling. They have a quarterly journal that is very informative. The members are all over the world, with local chapters, and are always happy to meet a fellow quiller. The Guild originated the Quilling Accreditation exam, which I passed on my second try. I was very proud to have achieved this award.

The North American Quilling Guild – This is the American spin-off of the Quilling Guild, although it now has many international members. It has a journal and an annual conference, local chapters and its own accreditation standards.

Giclee – is the technique of taking a digital image and printing it on a large format, high resolution computer printer. “Giclee” is named from the French word meaning “that which is sprayed”, referring to the fact that ink jet printers spray ink onto paper. If printed on archival paper, a giclee will be a high quality, permanent print.

Gilding – the application of metal leaf, usually some type of gold, to a surface. In my work, I generally use the technique of “oil gilding” to adhere 23k gold leaf to paper. This leaf comes in sheets of 3” x 3”, and it is so thin as to be translucent. Genuine gold never tarnishes, so it does not require any varnish or finishing coat, unless it is to be handled frequently. I occasionally work with aluminum, silver and copper leaves as well.

Lithograph – a method of reproducing artwork in which the image is separated into different color components (4-color is standard, that is, the technique takes an image and separates it into cyan, magenta, yellow, and black (CMYK).) Those are then engraved on rollers, and the press is run. If printed on archival paper, lithography will yield high quality, permanent prints.

Quilling a technique that involves rolling strips of paper into small coils, and shaping the coils into decorative forms and groupings. The designs so formed look much like metal filigree, and indeed, another name for quilling is “paper filigree”. It was most popular in the 18th and 19th centuries, and was considered suitable work for elegant young ladies. It is even mentioned in Jane Austen’s Sense and Sensibility. Early uses of quilling included ornamenting tea caddies, candle sconces, and deep-set floral designs made entirely of tightly coiled papers. Quillers today can buy pre-cut strips of paper in many colors, ranging from 1/16th” to 1/2″ wide, with 1/8th” being the standard. The paper is about 60-70 lb weight. It is rolled around a pin, tapestry needle, toothpick, or other tool of preference, or one can purchase a “quilling tool”, which is like a slotted needle with a handle. “White” glue is applied sparingly and strategically.