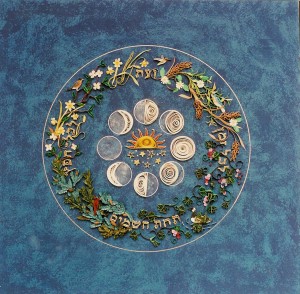 I  created this for a patron who wanted something Jewish that would also reflect the natural world.  It illustrates the verse “To everything there is a season, and a time to every purpose under heaven”.  The center shows the sun and stars, and around them the phases of the moon.  The outer circle shows the four seasons, with appropriate flora and fauna.  I had just moved to Minnesota at this time, so I included a Canadian “honker”.  Everything is made of quilling paper, with some 23k gold edge gilding.  The background is sponged gouache on matboard.  This image was later chosen by the UJA for their 1995 greeting card.